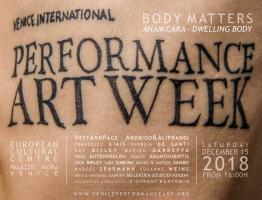 "When we are understood, we are at home – so here we dwell."

On this occasion, Palazzo Mora’s main hall and its six adjacent rooms will transform into a dwelling site of interconnected performance installations, where temporary, intensive co-creation processes aim to reveal qualities of existence.

As the title "Anam Cara" suggests, the artists – soul friends – gather and unveil hidden intimacies of their lives. They perform to find and draw from a common origin, their bodies engaging in acts of recognition and belonging. "Anam Cara" cuts across the normative, morality, categories of thought. The soul is uncaged, free from constraint, to foster companionship.

An absolute "I" is unthinkable, for the "I" is social. When more people share their sensory perception of the reality and live it as a felt mutual experience, the mirror of Narcissus falls into pieces: individual selves become relational and call for the collective, having no more reason to determine their singularity.

In a performance opera, visions are like threads that intersect with one another in an interweaving of lives and biographies, destinies and dreams, performed without a preconceived design. Both artists and the audience become part of an existential fabric, which consists of a performatic crossover of systems and patterns in an ever-changing reconfiguration of the notion of coexistence.

Castling under the weft of ephemeral scenic compositions woven of existential paths and with a non-linear narrative, the artists are absorbed into one multifaceted "Dwelling Body," where the form, the image, the language, the gaze and the understanding simultaneously harbour to find shelter.

"Anam Cara – Dwelling Body" does not take place in a univocally descriptive or representative staged act. It follows a non-linear narrative structure, which develops through time-based interaction between the artists and the viewers, so as between people and cultures. Eventually, it is a founding aesthetic momentum where actual places, metaphorical places, invisible places and imaginary places are home of a perceptual itinerary, which the artists and those who will come to attend will shape in the now.